You're Introverted? You're perfectly normal! 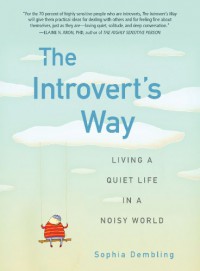 It was by mere chance that I looked into the giveaways on GOODREADS on a day in February and found Sophia Dembling’s book The Introvert’s Way: Living a Quiet Life in a Noisy World listed on top because the deadline was already around the corner. Of course, I entered to win immediately… and I actually won a copy!

Introversion and everything related to it is a topic that interests me very much and I already read the one or other excellent books on it, e.g. Quiet: The Power of Introverts in a World that Can't Stop Talking by Susan Cain or The Highly Sensitive Person. How to Thrive When the World Overwhelms You by Elaine N. Aron. The Introvert’s Way by Sophia Dembling isn’t really like them. In a nutshell: it’s the long version of “I’m not mad or depressed or antisocial. I just need to not talk to anyone for a while. And that’s okay”, a saying which I stumbled across on facebook just recently. To me it appears that this book is first of all meant to lift the morale of introverts doomed to live in a world adapted almost exclusively to the needs of extraverts. Sophia Dembling is a writer from Texas and consequently her focus is on the situation in the USA, but things are hardly better in Europe (also because of the ongoing and often lamented Americanisation of our society).

The author of The Introvert’s Way confirms what introverted people like me have experienced all our lives: we are constantly told or at least made feel that something is terribly wrong with us, that it’s healthy and normal to be outgoing and talkative while it’s shameful or even kind of crazy to crave for solitude and not to enjoy small talk. And yet, there are many more introverts around than most people think – according to scientific estimates as many as half (!) the population may be born with introverted brains. Research is still uncertain, incomplete and biased in favour of extraverts in this field, but it seems that introversion (unlike shyness which isn’t the same!) is rather in innate character trait than a learnt behaviour or attitude. However, most of us are drilled to extraverted behaviour from a very early age on and some of us never become aware of being introverts really... and they never stop wondering why energy drains out of them so quickly.

My favourite chapter in Sophia Dembling’s book is Don’t Call Us, We’ll Call … Well, No, Maybe We Won’t. I’ve always been led to believe that I was suffering from some kind of weird phobia of telephones, but now it turns out that my aversion against the invention of Alexander Graham Bell is actually an introvert’s thing! What a relief! And probably it’s the most important point of this book that it shows introverts like me that we are perfectly normal even though we differ from the extravert ideal to a greater or lesser degree. The author’s compilation of own and other introverts’ experiences in particularly overwhelming social situations helps to understand our introverted personalities and needs a little better.

The language of The Introvert’s Way is very colloquial and usually non-scientific although the text is salted with a few references to ongoing research on introversion. However, to my taste the scientific backbone is a bit missing. Consequently, it fits better into the genre of self-help than popular science.

All things considered, The Introvert’s Way: Living a Quiet Life in a Noisy World by Sophia Dembling is a book that I can recommend with good conscience to introverts who need a bit of encouragement to live their true nature without feeling ashamed or insufficient. Also extraverts might profit from the read since it explains what is going on in our heads when we just sit around and don’t talk. However, it can only be an introduction into the topic.