Three Irish Women Between Past, Present and Future: A World of Love by Elizabeth Bowen 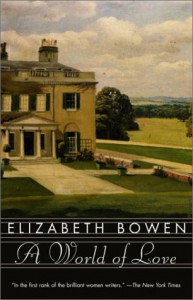 In her 1955 novel A World of Love the Anglo-Irish author Elizabeth Bowen evokes the atmosphere of a decayed rural manor in County Cork, Ireland, in the early 1950s to tell the story of Antonia Montefort, Lilia Danby and her twenty-one-year old daughter Jane. A packet of love letters which the young woman finds in the attic by accident confronts the women with the past embodied by Guy Montefort, the former owner of the manor, Antonia’s cousin and Lilia’s fiancée, who was killed in action during World War I. All of a sudden the house is filled with Guy’s ghostly presence and the people at Montefort are drawn into the emotional whirl of memories, disappointment and grief coming to light. Even Jane is under the dead man’s spell although feeling her own bright future waiting around the corner she doesn’t give the past much thought.

A World of Love is a philosophical and psychological novel revolving around love, pity and the influence of time on people. Overall there isn’t happening much. The story comes alive rather through the atmosphere which Elizabeth Bowen’s poetic language creates than through the simple plot that spans no more than three extraordinarily hot days in June. The dilapidated manor, the picturesque landscape and the suffocating heat mirror the psychological condition of the characters, their memories and everything unsaid between them. Guy is the omnipresent symbol of love sought, found and eventually lost. To my taste there could be a little more action and the unconvincing end comes rather too sudden, but for the rest it’s an interesting and easy-to-read novel.

Doing some online research on A World of Love I found that it probably isn’t Elizabeth Bowen’s best work. Despite all I enjoyed the read and recommend it.

For the full review please click here to go to my blog Edith’s Miscellany.