The Fall of the Byzantine Empire: Constantinople by Roger Crowley 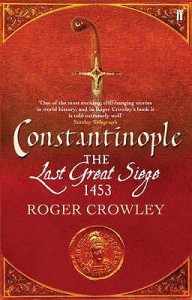 With thousands of refugees streaming to Europe along with (mostly illegal) immigrants and with terrorism being a futile though popular kind of “battle” preferably used by those who know nothing but violence to make their point, there is much talk about the clash of cultures. The most obvious tensions certainly are between the Christian and the Islamic world, but they didn’t just arise out of the blue. In fact, they date back a very long time and to understand them properly it is essential to know their historical as well as socio-political background. Undoubtedly, one of the key events in Muslim-Christian relations is the end of Christian Byzantium. In his book Constantinople. The Last Great Siege 1453 English writer Roger Crowley paints a vivid picture of the last weeks of the glorious capital of what remained of the Eastern Roman or Byzantine Empire.

When in spring 1453 the Ottoman Empire under Sultan Mehmet II besieged Constantinople, the legendary capital of Byzantium, it was the final show-down between Christians and Muslims in the area. After the conquest, the Balkans, Asia Minor, the entire Middle East, Northern Africa, and large parts of the Mediterranean Sea remained under the control of Ottoman rulers for centuries. But it wasn’t only the overwhelming power of Ottoman troops – they outnumbered the defenders ten to one – that brought about the fall of Constantinople because in reality the decline of the Eastern Roman Empire had begun already long before. During the preceding hundreds of years political intrigues, religious schism, the pillage of Christian Knights during the Fourth Crusade in 1204, civil wars, devastating earthquakes, the plague of 1371, and altogether twenty-three sieges had gradually reduced the once prosperous metropolis to little more than a thinly populated agglomeration of dilapidated villages. The three-layered Theodosian land wall together with the chain across the Golden Horn that were considered insurmountable (some remains can still be seen in modern-day Istanbul) were more or less all that was left to guarantee Constantinople’s sovereignty, but by 1453 they were in poor condition and the Ottomans used a new weapon to break through – canons. Nonetheless, the Byzantines under Emperor Constantine IX Palailogos and supported only by a few thousands of Greek and Italian soldiers because Roman Catholic powers refused to send troops held out for weeks giving the Ottomans a fierce as well as bloody battle.

It’s to the author’s credit that he used a great variety of historical sources and chronicles the last siege of Constantinople with the relevant history of the centuries before from a relatively objective point of view. Thus in his account it isn’t a fight between Good and Evil, between the faithful and the infidels, between the cultured and the barbaric, but a war between equals who strive for power with religion as an additional incentive. Since the book is popular science, not in-depth historical research for academic purposes, the narrative style is light and gripping. Moreover, several illustrations and an extensive bibliography accompany the text. It was a mere pleasure to read this book.