A psychologist in the Concentration Camp: Man's Search for Meaning by Viktor E. Frankl 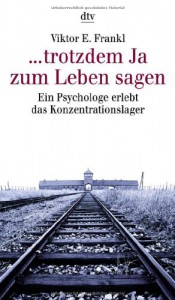 I first read what the psychiatrist Viktor Emil Frankl experienced as a prisoner and slave laborer just before the new millennium, at a time when I was in a crisis and searching for meaning myself. I seldom reread books, but this one I read three or four times because its message is so encouraging and so inspiring.

The story of Viktor E. Frankl's time - and suffering - in the concentration camp is told from the point of view of a psychiatrist. As he would have done in a research paper, he analysed the situation and identified three psychological stages that every inmate of the concentration camps went through and that Frankl could discern on the basis of obersation of his fellow camp inmates as well as of his own experience. In the initial phase of admission to the camp every inmate was in a state of shock regarding the conditions there and the probable fate of himself as well as of his family and friends. As soon as the prisoners had become used to their miserable existence in the camp, apathy followed and all they still cared about was survival. At this point Viktor E. Frankl noticed that all those who could still find sense in life - through religion or in Frankl's case the day dream of giving a public lecture about his experiences in the concentration camp after liberation -, were more likely to live than the others.

The language of Viktor E. Frankl may sound a bit antiquated today, especially in the original German version, but the message keeps being important, consoling and encouraging. Besides, we can't be reminded too often of the horrors that Adolf Hitler and his terror regime brought over Europe, not just over the Jews, but over all people who were different in some way. Man's Search for Meaning is a book that I highly recommend to everyone, no matter if you see a meaning in your life or if you don't. The book is worthwhile the time.

To read the full-lenght review of the book on my book blog please click here.